Steer government toward improving water quality by regulating major sources of discharges of microplastics and PFAS, as opposed to unfair regulation of linen and uniform laundering, especially new rules that would require onerous pretreatment

Preserve industry’s ability to create and maintain middle-level management jobs by ensuring the salary threshold for exemptions is set fairly and the definition of an “exempt employee” is clear.

Prompt state tax code changes that ensure the industry is taxed in accordance with its positive impact on the economy, paying the same level as other industries whose impact is comparable

TRSA supports a 20-cent-per-gallon fee on motor fuels – collected at the wholesale rack – to raise funding for investment in infrastructure. This fee would be phased in over four years at a nickel per year and generate $340 billion over the next decade for road and bridge repair and replacement. We also advocate protecting the under-funded Highway Trust Fund so it cannot be used for projects unrelated to surface transportation. s.

TRSA is working to place the linen and uniform service industry in the same “franchise tax” (actually a margin tax, in the same vein as income tax) classification as retailers and wholesalers. They pay 0.375 percent compared with 0.75 percent for all other businesses. Enabling legislation passed in 2008 expanded the franchise tax to nearly all businesses; previously it was primarily applicable to corporations and LLCs and was based on taxable capital and earned surplus. TRSA hired Texas legislative representation and held a Legislative Conference for members to educate legislators and regulators on linen and uniform service operations and the positive change that this tax reduction would produce. More than 100 legislators’ offices were visited. A state representative introduced a bill providing this reduction for our industry; TRSA testified at the bill’s hearing and it passed the state house. TRSA also testified in the Texas Senate Committee on Finance, however the legislative clock ran out and the bill was not passed in the Texas State Senate.

TRSA defeated a California bill which would have required any commercial laundry operating in California to install filtration devices to eliminate microfibers in the waste stream at a cost of over $500,000 per facility. TRSA met with the bill sponsor’s staff and other legislators, noting the relatively small volume of discharges from linen and uniform services compared with other sources, especially home laundries. Microfiber discharge is expected to be reconsidered, with the state assembly’s Environment and Toxins Committee planning to study microfiber discharges in laundry wastewater. 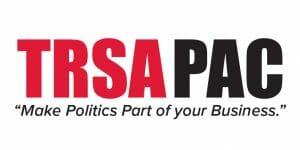 TRSAPAC backs key members of Congress who support the industry, upholding our legislative goals and supporting our regulatory initiatives. Engaging TRSAPAC-supported legislators in our advocacy with the IRS and EPA has had a measurable impact on these agencies’ rulemaking, protecting textile services operators’ profitability. Donations are increasingly vital as regulators actively attempt to finish new regulations and Congress gears up for election battles.