Associate Achievement: Milton Magnus ‘I Love What I Do’ 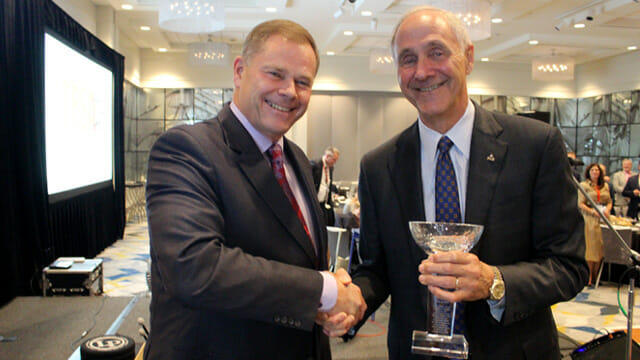 Milton Magnus III, president and CEO of M&B Hangers, Leeds, AL, received TRSA’s Maglin/Biggie Associate Lifetime Achievement Award at TRSA’s Sept. 19 Awards Dinner at the association’s 106th Annual Conference in Boston amid a heartfelt show of thanks to customers and colleagues, as well as family members who’ve backed this company for four generations.

“First of all, I couldn’t do any of this without my wife Gail,” said Magnus in a brief acceptance speech. “Recently we’ve celebrated our 45th anniversary. She’s without a doubt my driving force and my rock and the love of my life, so Gail, thank you.”

Magnus also acknowledged the couple’s three children, including Mack, who is vice president of M&B Hangers, plus the family founders and staff of M&B, who’ve fueled the success of the company. “I really want to thank my grandfather who started the company, and my father who allowed me to come to work with him as well as my mother, who taught me many things, but also taught me to love,” said Magnus, his voice heavy with emotion. “Most of all I want to thank the 250 hard-working people at M&B Hangers, the men and women that make our company the great company it is today. They work so hard so that I can get out and do what I love to do, which is serve the textile rental industry.”

In introductory remarks, TRSA Chair Jim Buik told the crowd of nearly 200 people gathered at the Awards Dinner at the Hyatt Regency Boston Harbor of Magnus’ extensive efforts to ensure fair trade with Chinese hanger manufacturers, a process that ultimately achieved success. “This guy is tenacious,” said Buik, who is also president of the Roscoe Co, Chicago. In 2007, Magnus led a successful effort to file an anti-dumping and countervailing duty petition. However, the illicit imports continued through “transshipments” made through third countries, he said. A stronger effort was needed, and Magnus led the way forward. “His six years of testimony and meetings Washington contributed heavily to the passage of the Enforcement and Protect Act to remedy this situation,” Buik said, adding that, “Milton is a gentleman and dedicated to his business and dedicated to his family.  I’m proud to award him with the Maglin/Biggie Award.”

Magnus said he was surprised when he got word from TRSA President and CEO Joseph Ricci that he’d been tapped by the Associate Executive Committee to receive the award, knowing so many other associate members are equally deserving of recognition. “It blew my socks off,” Magnus said. “I couldn’t believe it. There’s so many very qualified people in this room, and you know to get an award for something that you love to do. … It really didn’t make sense to me, but I really love the industry. I love my company and I love what I do. Like Steve DiFillippo (Wednesday’s keynote speaker) said yesterday, you’ve got to love what you do to be successful. And I really love what I do.”

As part of this commitment to the industry, M&B recently worked with the Roscoe Co. to solve a problem with a garment sortation system. Magnus sent one of his Distributors, Steve Matthews, to Chicago to look at the issue. Matthews and Mack Magnus worked on and designed a bespoke hanger that would move more efficiently through the sorting system. In a relatively short time, the problem was resolved. “Steve Matthews saw an opportunity to help Roscoe with some issues they were having,” Magnus said. “So Steve went to the plant, worked with their people there, designed a hanger, sent it to the plant, Dallas (White, operations manager) and Mack really got on it and made it, and designed a hanger that seems to work well for Roscoe and their operation.”

After his presentation, Buik said of the hanger situation at Roscoe that, “Milton was modest in the story. We had a tough problem and his company jumped to the rescue.”

In addition to thanking his team and industry colleagues, Magnus praised his suppliers for aiding in the success at Roscoe and in all aspects of M&B’s business. “The team’s very customer focused, customer oriented and we’re very fortunate to have that,” he said. “Also, we couldn’t do this without our vendors, steel vendors, paper vendors, box vendors, ‘money’ vendors (the audience laughed at this subtle quip at bankers) and many other items. They’re loyal to us, we’re loyal to them. They’ve made us the leader in the industry.”