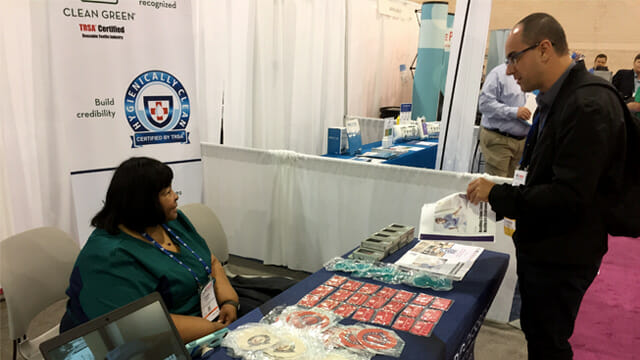 Interest in Hygienically Clean Healthcare certification from infection prevention personnel working in long-term care settings has quadrupled in the past two years – judging by their interest in the certification’s exhibit at the recent Association for Professionals in Infection Control and Prevention (APIC) Conference.

The prototypical APIC visitor to the Hygienically Clean displays has been an infection preventionist based in a hospital (acute care/inpatient) or healthcare chain providing acute and ambulatory-care services. In 2017, this group accounted for almost 60% of such visitors; this year, that figure dropped below 50%. Who’s filling that gap? The most impressive gain has been from long-term care, increasing from 2% to 9%, factoring out this facility type’s acute-care segment.

The tripling of that figure in the past year (3% to 9%) is likely due to the industry’s deadline to implement key provisions of Phase 3 of the 2016 update of the Center for Medicare and Medicaid Services (CMS) Requirements of Participation for Long-Term Care Facilities, the first comprehensive revision to the regulations since they were issued in 1991. Implementation of these provisions is required on Nov. 19.

Two-thirds of the 27 (18) Hygienically Clean Healthcare exhibit visitors from long-term care (including acute) since 2017 described their primary role as infection prevention. Less than one-fourth (six) indicated they were in nursing roles, such as registered nurse or associate/assistant nursing director. (At each of the past three APIC conferences, 150 to 200 attendees have visited the TRSA exhibit, with demographics captured on 123 to 165.)

The interest of the long-term care industry in Hygienically Clean coincided with the June conclusion of TRSA’s 2019 advertising and direct-marketing campaign aimed at building the industry’s interest in closing their on-premises laundries (OPLs) and outsourcing their laundry work. The TRSA effort comes at a time when long-term care providers’ concern for the viability of their revenue sources is increasing, given the industry’s growing reliance on shrinking public-pay sources (Medicaid and Medicare) and decreasing private pay. Such concern is prompting long-term care providers to increase scrutiny of all expense line items, not just the most costly line items, but a variety of others that could be decreased without compromising patient care, such as laundry.

Key facets of access control described include managing storage properly and keeping clean linen in designated areas with access. Hallways are depicted as not preferable; they’re high-traffic areas, prone to higher contamination risk. The role of storage in cleanliness is highlighted because when shelves and carts are placed properly, cleaning linen rooms and carts is easier; and circulating linen at the same time these rooms are restocked can reduce dust and dirt buildup.

This Six C’s video can be viewed at no charge with the companion Six C’s for Handling Soiled Linen in a Healthcare Environment in the recording of TRSA’s June 7 webinar. Access the recording here.