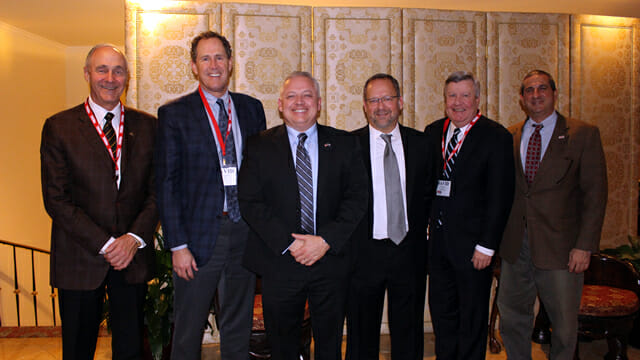 As a retired Air Force officer, the one-time owner of two intelligence-related consulting businesses and the current proprietor of a distillery, U.S. Rep.-elect Denver Riggleman (R-VA) may not fit the mold of a career politician. But with his laid-back style and lively wit, he was more than happy to weigh in on a range of issues – from regulatory reform to immigration and healthcare – that impact the people of his central Virginia district, which stretches from the Washington, DC, suburbs to the North Carolina border.

One of a handful of 44 Republican freshman House members, Rep.-elect Riggleman addressed a group of TRSA members in Washington DC on Dec. 5 as part of an opening reception for the association’s twice yearly “Fly-In” meetings that drew about a half dozen attendees. Democrats, who took control of the U.S. House following the Nov. 6 election were virtually all out of town at a conference in Boston sponsored by Harvard University. In addition, schedules for the week in Washington were scrambled due to funeral services for former President George H.W. Bush. Nonetheless, the TRSA Fly-In team held several highly productive meetings with elected officials and administration leaders on the morning and early afternoon of Dec. 6.

Rep.-elect Riggleman, who went by the nickname “Chunk” in the Air Force, told the TRSA members gathered at the Capitol Hill Club that he was nominated to run through a convention process that he won by single vote. What convinced him to run was his experience of having to deal with unfair and unworkable regulations related to his work as a whiskey producer. “I was all by myself and finally, I had somebody tell me ‘Denver, if you’re not at the dinner table you’re on the menu.’”

As the owner of the Silverback Distillery near Charlottesville, VA, Riggleman described his frustration in dealing with various regulatory bodies. “I got started fighting against regulations,” he said. “Three-letter agencies that were crushing me.”

He says he’s still a bit stunned that he won the election and that he raised $2.2 million in campaign donations a few months. Rep.-elect Riggleman now has a relatively small campaign debt to retire, and he’s already fundraising for the 2020 campaign. He won the Fifth District by a 7% margin (20,000 votes). However, the district, which includes Charlottesville, the home of the University of Virginia, and Fauquier Country in the DC suburbs, is increasingly competitive. A broad economic mix adds to the challenge of serving constituents in this combination urban/suburban/rural district. The average yearly income in Fauquier County is about $90,000; in semirural Danville, VA, it’s about $32,000.

But for Rep.-elect Riggleman, the effort is worthwhile because he wants to make a difference. “I’m one of 435 (members of Congress) but what if somebody could come in and at least maybe bring some common sense to the regulatory burdens that companies face?”

Immigration is another area ripe for reform, Rep.-elect Riggleman said. Many jobs, particularly in rural areas of his district (larger than New Jersey and Delaware combined) are going unfilled due to a severe labor shortage. The message he gets from constituents, including “bubbas in small business,” is that they want a secure border, but also a streamlined process that lets people fill jobs on dairy farms and other agricultural businesses that badly need them.

A third topic that generated lively discussion during his one-hour session with TRSA members was healthcare. Rep.-elect Riggleman said he favors greater transparency and a renewed focus on market-based reforms such as health savings accounts that can help make employer-provided healthcare more affordable for businesses and more effective for employees, particularly for hourly workers at the low end of the wage scale.

To learn more about TRSA’s Fly-In program and its government outreach efforts at the federal, state and local levels, contact Vice President of Government Relations Kevin Schwalb at kschwalb@trsa.org.