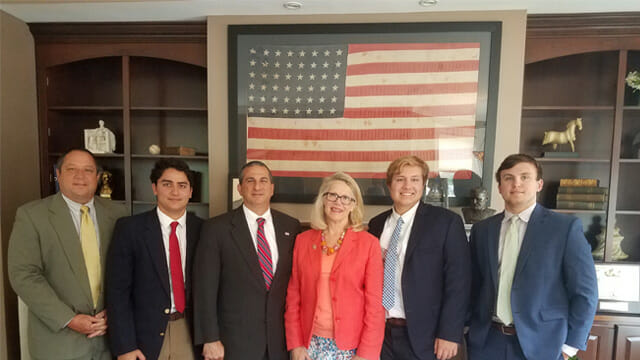 TRSA hosted bipartisan discussions regarding issues critical to the linen, uniform and facility services industry’s continued economic growth, including infrastructure investment, labor and immigration reform with U.S. Reps. Tom O’Halleran (D-AZ) and Carol Miller (R-WV). While both understand the importance of these issues for business, neither was optimistic that anything would get done before the 2020 elections.

Rep. O’Halleran, a former Chicago homicide detective and small-business owner, is entering his second term and first as Blue Dog Coalition co-chair for policy. His constituents represent a diverse base concerned about healthcare, drug prices and the lack of cooperation in Washington. He added that Arizona, unlike other areas of the country, understands the value of immigration, noting that “Sen. McCain once offered $50 per hour to any non-immigrant constituents willing to pick lettuce all summer long; he never had to pay. Immigrants are a vital component of our communities and the United States is dependent on their work for food and essential services.”

Rep. Miller, the only freshman Republican woman elected in 2018 after spending 12 years in the West Virginia House of Delegates, has been most surprised by how difficult it is to make progress. “My father was involved in politics so I grew up around it and know how to get things done,” said Rep. Miller, who was born in Columbus, OH, and is the daughter of former Rep. Samuel L. Devine (R-OH). “The country, and my state, need to invest in infrastructure; roads, bridges, tunnels, the internet and energy grid.” West Virginia supplies coal-powered electricity to large portions of the United States. “Even California is dependent on West Virginia coal,” Miller said. “Our state was hit hard by the last recession that led to West Virginia’s opioid epidemic, but the Trump administrations’ support of coal is helping revive our economy and our people.”

TRSA President and CEO Joseph Ricci and Vice President of Government Relations Kevin Schwalb emphasized that TRSA’s linen, uniform and facility services members business growth has been limited by shortages of skilled and unskilled labor, and that decaying roads and bridges are costing companies money and time.

“TRSA members represent the third largest private fleet in North American with nearly 30,000 vehicles on the road,” Ricci said. “The lack of investment in critical infrastructure is taking a toll on its vehicles and extending delivery times with members spending more on repairs, wasting hours in traffic and even traveling dozens of miles to get around damaged bridges.”

Rep. O’Halleran serves on the Energy & Commerce and Communications & Technology Committees and is committed to “leaving behind a better world for his grandchildren” by focusing on environmental issues such as understanding and managing Arizona’s water resources. He applauded TRSA for its Clean Green initiatives with the EPA to reduce water and energy consumption. Rep. Miller, who operates a bison farm and manages real estate, serves on the Transportation & Infrastructure and Oversight & Reform Committees.

@trsa delegation discussing labor and infrastructure issues with @RepOHalleran. We appreciate his leadership in the Blue Dog Coalition. pic.twitter.com/2vhniJMkLD