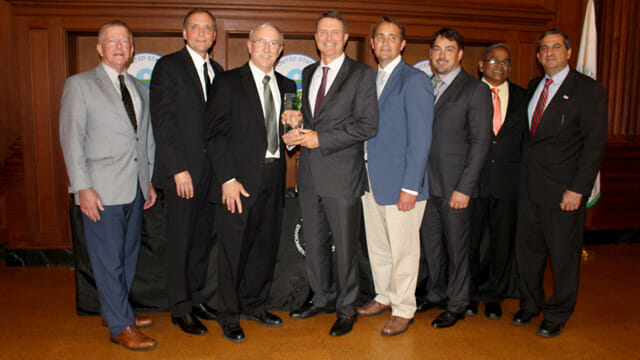 WSI recently was named as one of four winners of the Environmental Protection Agency’s (EPA) Green Chemistry Challenge Awards for the company’s TRUpath™ wash process. The June 10 awards program took place at the agency’s headquarters in Washington, DC.

“These awards tonight are a great opportunity to celebrate the environmental success and spirit of innovation,” said Alexandra Dapolito Dunn of the EPA during the agency’s 23rd annual Green Chemistry Challenge Awards program. “Creativity, ingenuity and innovation have always played an important role in our country’s leadership in the world. And this year’s awardees are no exceptions to that.”

Dunn, who serves as the EPA’s assistant administrator, office of chemical safety and pollution prevention, added that this year’s winners are similar to the roughly 100 past honorees of the Green Chemistry Challenge Award in that their work benefits both the U.S. public and the private sector.

The awards ceremony, co-sponsored by the American Chemical Society, was held in the “Map Room” at 1201 Constitution Ave., a building that once housed the Interstate Commerce Commission. The event kicked off with a color guard comprised of service members from various branches of the military. They marched in, clad in dress uniforms, bearing the U.S. flag. Among them was a soloist who sang the national anthem a cappella in a rich baritone voice. This opening set the tone for a feeling of good will between the EPA and the private sector, with both organizations focused on achieving sustainability, while at the same time benefiting the economy. “Our awardees add to the mounting evidence that we can innovate toward a robust economy and remain competitive in the marketplace,” Dunn said.

In a brief interview before the ceremony, WSI President and CEO John Walroth said he and his team are pleased and a bit awed by their success with TRUpath after a lengthy development process. Walroth, who attended the awards ceremony with several colleagues, described a five-year process of trying to find a workable formula that was hygienically clean, alkali-free and cost-effective. “It was a team effort. Our goal was to help the industry and the environment.” He added that he’s delighted with the positive effects of the wash process, including clean textiles and reduced fabric wear – along with the removal of alkali to benefit the environment.

The awards program judged each applicant based on three criteria:

The Green Chemistry Challenge Award recipients excelled in each of these areas, Dunn said. “Some technologies met some but not all the criteria,” Dunn said. “But the winners tonight, we just have to say were the best of the best.”

At the end of this presentation, attendees will be able to:

– Confidently discuss the similarities and differences in bullying and harassment, and bullying and workplace violence
– Understand negative behaviors as a social phenomenon that includes peers, leaders, and organization’s culture
– Conduct a simple survey to determine the climate, and use the results to make a business case and create an action plan for positive workplace culture
– Implement a healthy workplace policy that has buy-in from employees
– Use company core values to drive and measure behavior
– Create a better, more powerful harassment prevention training program
– Use the three steps of intervention to help abrasive leaders change their ways

This webinar is the third in the TRSA Business Restart Series brought to TRSA members for FREE by Six Disciplines Consulting Service.

Presenters: Six Disciplines Consulting Service leadership Eric Kurjan and Audrey Carmichael will provide instruction and use of best practices and appropriate tools to aid in the restarting your own organization, including these topics:

– Supply Chain and Inventory
– Accounts Receivable Management
– Staffing and Operations
– Customer Retention
– Communications – Internal and External Plan
– Future Strategic Planning – what to do next
– Tool overview – where to download, how to use
– Question and Answer Session