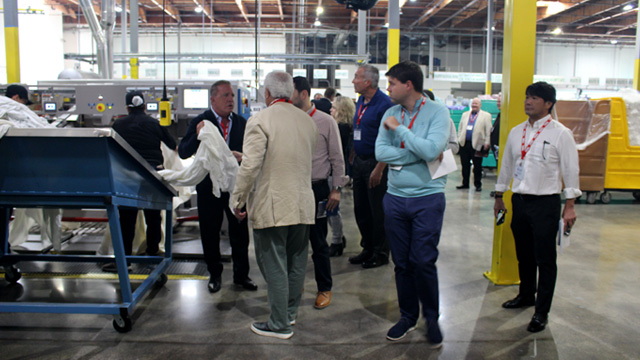 Three busloads of attendees at TRSA’s 8th Annual Healthcare Conference capped their three-day program with a tour on Nov. 21 of Emerald Textiles’ 120,000 square-foot healthcare laundry on the southern outskirts of San Diego.

This correspondent’s made several visits to Emerald’s San Diego plant, which was established in 2010 as a 50,000-square-foot facility. Since then, it’s done nothing but grow and add refinements to its collection of equipment, as attendees saw in tours led by Jaye Park, president of business development for the company that now operates six plants across California, plus one each in Reno, NV; and St. George, UT.

Our first stop was the plant’s four boilers (stored outside) and its water storage and reuse system from Norchem Corp. that allows the plant to process 1.3 million lbs. per week using .4 gallons per lb. Some 450 employees work at the plant.

Within the past couple of weeks, Emerald has added new equipment as well. A Chicago themal-oil ironer that meets California’s strict emissions requirements and a clean-side rail system from ETECH was installed while the plant continued to operate without a break.

Park noted that the plant also operates two double-decker tractor trailer trailers made by a Canadian firm that enable the company to “cube out” its trucks for twice-daily trips to the company’s Riverside, CA, depot.

All this innovation adds up to major growth for Emerald. The company currently serves 90% of the healthcare market in San Diego. On our first visit to the plant, a significant portion of the building was rented out to another company. On a later visit, that tenant was gone, but the area was not yet developed by Emerald. On this trip, the entire plant is occupied and virtually all of it is in use. Not a bad pace of expansion for a not-quite-10-year-old company.