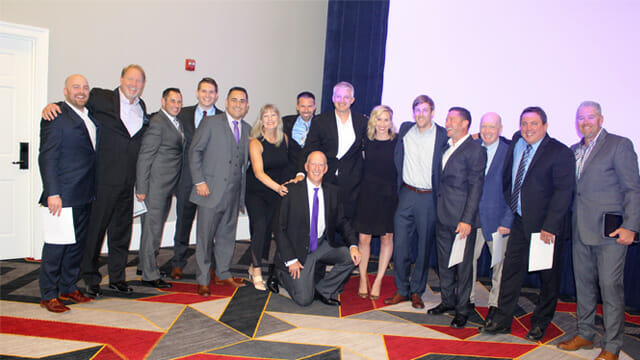 The EMI graduating class of 2019 is all smiles after receiving their certificates showing that they've completed four years of EMI education. At center (kneeling) is their instructor, Eric Kurjan, a new member of the EMI faculty.

TRSA’s 55th Annual Executive Management Institute (EMI) concluded with a rousing send-off for 14 Year Four graduates during an Aug. 15 commencement ceremony at the College Park Marriott Hotel and Conference Center just off the campus of the University of Maryland.

The 2019 EMI graduation ceremony reflected the program’s many traditions, including “open mic” opportunities for members of each class to reflect on their experiences, while also poking good-natured fun at various faculty members and any of the 80-plus students in the four one-year programs.

Speaking on behalf of the graduates, Tim West, Sparkle Uniform & Linen, Bakersfield, CA, summed up the impact of EMI, noting that it offers not only education, but also the forging of powerful bonds among the students who attend from companies across North America. “I’ll be forever connected to these folks,” he said. “I think they’d probably say the same thing. We’re joined by our experiences, our friendship, and solidified by respect and trust.”

West also read an excerpt of a poem that first-time Year Four faculty member Eric Kurjan shared with the class. The lines he quoted spoke to the way individuals change and grow during EMI:

When you get what you want in your struggle for self

And the world makes you king for a day

Just go to the mirror and look at yourself and

See what that man has to say

As with most EMI commencements, much of the discussion centered on recognizing – and occasionally lampooning – faculty members past and present. Kent Baker, a professor at American University and a 40-year-plus dean of EMI, described the faculty/student connection as a critical component of EMI. “Faculty are the heart and soul of the program,” he said. “They come here for a very simple reason. They love what they do and they love having the feeling of sharing some of their experiences and knowledge with you.”

For many EMI alumni, the lessons learned from faculty members such as the late Les Frankfurt and David Martin, a former Nixon administration foreign policy adviser, have enduring value. In a keynote address, Dan Clay, vice president of Rentwear Inc., North Canton, OH, and a 2000 graduate of EMI, recalled these two, plus a third instructor, Barbara Bozak. She spoke on the importance of personal growth, saying “‘Are you ready to give up who you are for what you may become?’ It comes back and it echoes,” Clay said.

Clay added that the connections he made at EMI two decades ago endure as well. “You develop some lifelong friends in the industry,” he said. “I’m still in touch with quite a number of the guys and girls that I graduated with. The nice part of that is if you get in a pickle, you have an opportunity to call them and say ‘I got myself into this trouble. How do I get out?’ You get some reasonably good advice like ‘Don’t you remember talking to Kent Baker about conflict? Just deal with it.’”

Another opportunity for the EMI students to reflect on the professional and personal connections they forged through the program was the pending retirement of Jim Kroncke, who’s taught Year Two students since 2007. Kroncke says he and his wife want to spend more time with their grandchildren. Year Two student Cory Rosenberger, HCSC, led a rollicking commemoration of Kroncke’s pending retirement, jokingly referring to him as “Coach K,” a thinly veiled swipe at his support of the University of North Carolina basketball team by citing the nickname of the rival Duke Coach Mike Krzyzewski.

Joking aside, Rosenberger praised Kroncke’s teaching skills, noting his witty aphorisms such as “Don’t take life too seriously, it’s not like you’re going to get out alive,” and “Stay away from negative people, they have a problem for every solution.” As a gag gift, the Year Two students presented Kroncke with a safari-style pith helmet and beach toys for the grandchildren in recognition of his many “pithy statements.”

But beyond the fun and camaraderie of EMI’s commencement dinner, Clay pointed out a key benefit of the program is sometimes underemphasized. That is that many students come to EMI as managers and leave as leaders of their companies and the industry at large.

Clay asked for a show of hands as to how many in the audience thought EMI was a good management program. Every hand went up. Then he pointed out that EMI does more than that. “Here’s the reality guys: It’s a leadership program. They’re teaching you how to lead this industry.” He added that inspiring staff through personal leadership is a key to reducing employee turnover. “That’s why leadership skills are so important. Wouldn’t it be nice to keep the people you have? You do that by leading them; not managing them. Leadership is influencing and inspiring other people.”

Click here for information on the PMI graduation ceremony, which was also held on Aug. 15 at the College Park Marriott Hotel and Conference Center.