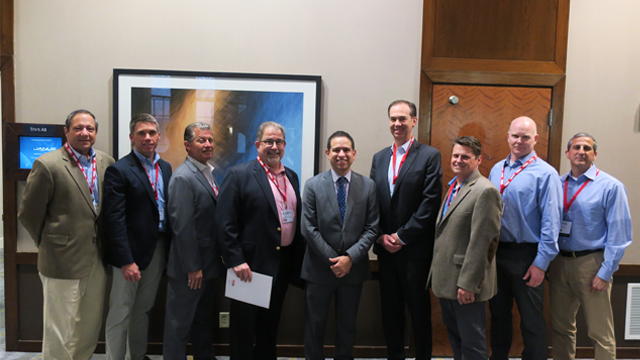 TRSA recently led a delegation of linen, uniform and facility services industry executives to the New York State Capitol in Albany for an impactful afternoon of meetings with key legislators and members of their staff during the New York State Legislative Conference.

The conference, held on May 3-4, featured seven meetings with members of the New York State Assembly and Senate during the final day of the event. Conference attendees met with the following officials:

The opening day of the conference featured an issue briefing by TRSA Vice President of Government Relations Kevin Schwalb, as well as a reception that featured an appearance by the Deputy Secretary for Transportation Nivardo Lopez. Lopez mingled with the group, and discussed upcoming transportation projects that could impact fleet operations, as well as issues such as the congestion pricing proposal that is under consideration for vehicles that enter New York City to make deliveries. Originally intended to focus on delivery drivers for consumer services such as Amazon, the law could have an adverse effect on the linen, uniform and facility services fleet by adding costs to enter the Big Apple to make deliveries to customers.

Conference attendees also were guided by the knowledge of Paul Thomas, a partner in The Parkside Group’s government-relations team. The Parkside Group aids TRSA’s efforts on behalf of its members in New York. If you have questions about the New York State Legislative Conference or any government-relations issues at the state or federal levels affecting the linen, uniform and facility services industry, contact Schwalb at kschwalb@trsa.org.