Hotels – A Period of Growth, Change and Disruption 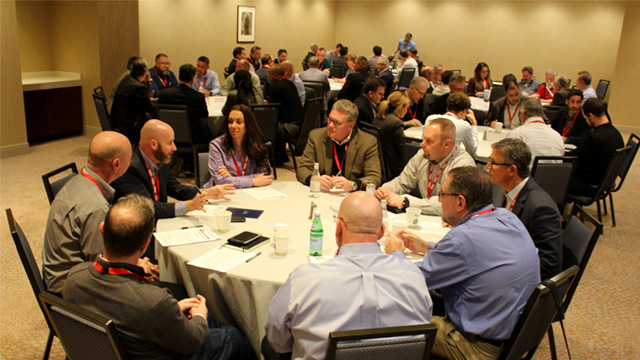 Attendees at TRSA's Hospitality Summit participated in a series of facilitated roundtables, where they discussed a range of challenges and opportunities, such as improving customer service and enhancing staff recruitment and retention.

The roughly 100 attendees who turned out for TRSA’s Second Annual Hospitality Conference got a 30,000-foot view of a hotel industry in the throes of rapid change and innovation from consultant John Burns.

The conference’s keynote speaker, Burns’ talk was titled “The Hotel of the Future.” He gave attendees a detailed overview of shifts in the hotel trade, including waves of growth and consolidation among the large national/international chains such as Hilton, Marriott, Accor, Best Western International and others.

Like the rest of the economy, hotel chains and independents—an increasingly disruptive force that’s triggering a major rethink of major company strategies—have grown steadily over the 11-year expansion that followed the Great Recession of 2008-’09.

Yet like other business that require lots of people to provide services for guests and other aspects of the operation, hotels have struggled with labor shortages. This could have a mixed impact on laundries, Burns said. On one side, it could clear the way for more laundry outsourcing to save money and, as importantly, labor. However, at the same time, the tendency at most hotels is to expect vendor/partners to do more with less. The issue of growth is a mixed blessing for hotels in that while demand is up, revenue per available room (Revpar) has bumped along for nearly a decade with minimal growth, thus keeping profitability pressures at a high level.

The hotel industry also is facing a wave of disruption from the “sharing economy” in the hospitality market space. This includes Airbnb and a host of similar vacation rental and other alternatives to conventional hotels. “When Brian Chesky and Joe Gebbia decided to make some extra money by renting several air mattresses on the floor of their San Francisco apartment in 2007, no one could have guessed that it would lead to Airbnb and the array of companies across the globe who offer similar accommodation,” Burns said. Today, Airbnb boasts 150 million users worldwide and some 500 million-plus stays. “On any given night, 2 million people are staying in Airbnb rentals across the world,” Burns said. An initial public offering of Airbnb is anticipated sometime this year, he added. Significantly, Airbnb is beginning to tap business travelers as well as vacationers seeking a different kind of lodging experience. When Burns asked for a show of hands of attendees who’d stayed at Airbnb properties for business travel, several hands went up.

The decentralized nature of Airbnb makes it a challenge for laundries to service its linens on an outsourced basis. But new opportunities in that area could arise as the business grows, he says. To succeed in this era, hospitality laundry operators must be nimble and quick to show hotel vendors they’ll meet the requirements.

Other market shifts that Burns emphasized was the attitude toward travel that young people – specifically millennials and members of the Gen Z cohort – have toward business travel. Their influence is fueling the rise of new hotel concepts focused on issues such as “wellness,” “adventure,” “micro” and other niches, Burns says. Many young travelers are looking for “Instagrammable” moments associated with hotel stays. To meet these demands, hoteliers are having to leave behind some hidebound positions of the past in order to survive. For laundry operators, that means that “You are now working with larger, more sophisticated clients with broader, more specific and more stylized requirements.”

Burns closed on a somber yet thought-provoking note. While the economy continues to show strength, inevitably the market will experience a downturn, probably sometime in the next two years. There will be a shakeout that will impact the hotel industry in ways that are hard to predict. One aspect that’s unlikely to shift even if the economy stalls badly is the hotel industry’s commitment to sustainability. This trend is driven in part by the international movement toward the “circular economy,” particularly in Europe. Again, as recyclers of linen, environmentalism could and should play to laundry operators’ strengths – provided they’re aware enough to demonstrate their commitment to conservation.

Other education programs during the Hospitality Conference included: