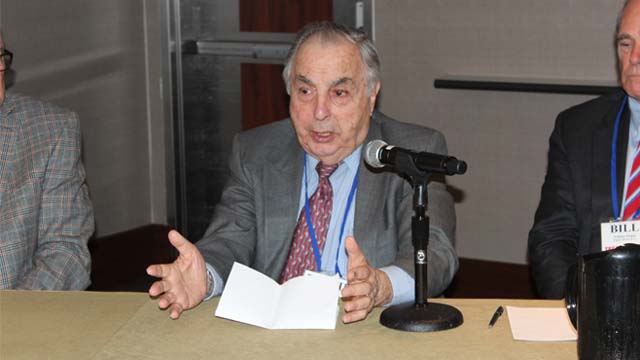 Bernie Gitlow speaks during a Legends of the Industry panel at TRSA's 2012 Annual Conference in Chicago.

A former TRSA treasurer and board member, laundry operator, consultant and lifelong industry advocate, Bernard Gitlow, 95, passed away on Dec. 16, 2021, at Lenox Hospital in his hometown of New York City.

“The industry will miss Bernie,” said TRSA Vice President of Government Relations Kevin Schwalb, who worked with Gitlow on industry lobbying efforts when the former Rentex executive was well past the standard retirement age. “I appreciate him sharing his knowledge and the enthusiasm he had in helping address the industry’s issues with policy makers. I could count on him to help with reaching out to policy makers to help protect the industry.”

Steve Fellman, retired TRSA general counsel and a longtime friend and associate of Gitlow, described him as a part of a groundbreaking group of operators who helped to make the linen, uniform and facility services industry the success that it is today. “He was one of the last of his generation of industry pioneers,” Fellman said, adding that “Bernie and I worked together on industry problems, played tennis together and enjoyed a close friendship. He had an amazing positive attitude and a great love for the textile services industry. He was constantly exploring new ideas.”

Donald Struminger, a former TRSA chairman (1977-’79) had a similar view of Gitlow’s approach to business. “Bernie was always inventive,” said Struminger, who is CEO and chairman of the board of Your Linen Service, a regional operator based in Petersburg, VA. “At least every other month, he would call me with some new project he was working on with some new convention or approach to business.”

Gitlow was part of a family of laundry innovators who also were prominent in TRSA, which prior to May 1979 was known as the Linen Supply Association of America (LSAA). Gitlow’s father, Albert Gitlow, was an LSAA elected leader in 1933-’34. Bernie’s first cousin, Herman Gitlow, chaired the LSAA from 1962-’63.

In what likely was Bernie’s last public appearance at a TRSA event, he served on an “Industry Legends” panel in October 2012 in Chicago with other notable operators from his era. After touching on public policy issues, Gitlow offered a quick summary of his own industry experience. He noted how his father Albert had founded a commercial laundry called Rentex in 1913, a year after TRSA’s official founding as the Ohio Linen Supply Association. The association went national in 1916 as the LSAA. Albert got the idea for a textile service business when he saw towels lying on the floor of a dentist’s office. The elder Gitlow offered to clean and return the dentist’s towels. Soon he was offering the same service to doctors’ offices throughout the building. The business grew from there.

In 1949, Bernie joined the family-owned company. Rentex grew steadily in the 1950s and ’60s. It went public in 1968 – a year before UniFirst Corp. began issuing stock, Bernie quipped during his Legends Panel presentation. Speaking of Rentex, Struminger added, “They did a beautiful job. They started from nothing and built a public company.” In the early ’80s, Bernie and Herman (the two men jointly ran Rentex), decided to merge the company with Sketchley PLC, a British laundry firm. “I did something my father told me never to do,” Bernie said. “A merger.”

Bernie later served on Sketchley’s board of directors. His partnership with the company ended in 1989 with his retirement and a transition to consulting work. Bernie served on TRSA’s board as well from 1979-’80, and as TRSA treasurer from 1980-’87. At the 2012 Legends Panel session, the always forward-looking industry leader urged his colleagues to leverage their growth with an emphasis on information technology (IT). “I feel our industry needs to focus on IT,” Bernie said. He called on TRSA to expand its outreach efforts and training in this area.

Struminger described Bernie as not only a shrewd business operator, but also pleasant company. “He was a gentleman,” Struminger said. “He was always nice to be around. We had a very nice relationship over many years.” In the late ’80s, Struminger, Bernie and Wim Giezeman, a Dutch operator, teamed up to run a laundry business. “The three of us formed a company and bought a healthcare operation out in Colorado,” Struminger said. “We ran that for a number of years. It was a very cordial relationship.” The business later was sold, he said.

Similarly, Fellman recalled many happy times spent with Bernie, not only in meetings on industry issues, but also on the tennis court, which – along with business and politics – was one of his passions. “Whenever we went to a TRSA meeting or convention, he was the first to find a tennis court,” Fellman said. “When I checked into a hotel, there was a message waiting, proposing the time and place of our next tennis match. My wife Linda and I had many enjoyable dinners with Bernie and his late wife Raya.” She passed away in February 2019.

A graveside service was held Dec. 19, 2021, at Cedar Park Cemetery, Paramus, NJ. Readers may share their remembrances and expressions of sympathy to the family by clicking www.riversidememorialchapel.com.