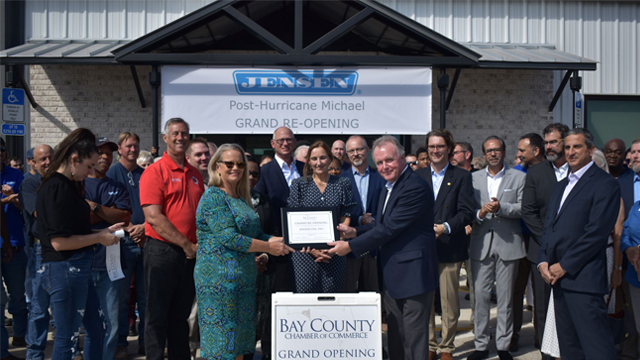 JENSEN USA celebrated on Oct. 5 the reopening of its Panama City, FL, facility that was severely damaged by Hurricane Michael. The reopening of the expanded 120,000-square-foot facility was five days shy of the storm’s fourth anniversary.

The celebration kicked off with the playing of the national anthem from Bay High School’s senior band, followed by speeches from company leaders, county officials and TRSA President & CEO Joseph Ricci.

“We’re pleased to finally be in our new building and operate normally. This has been a long-awaited journey and a real team effort to get to this day,” said Simon Nield, the company’s president. “It’s been a partnership with the community, and we’re very grateful for their continued support.”

The facility supports laundries in the U.S., Canada and the Caribbean with sales and service. The factory also manufactures equipment and material-handling solutions that are exported to all countries including L-Tron washer/extractors and tumbler/dryers, and Futurail soil sortation, overhead and conveyor systems.

Although the business reopened two weeks after the storm, the employees were displaced and worked out of separate offices for the past four years. According to company leaders, the building sustained roughly 20% damage to the roof of its administrative offices during the storm. David Netusil, JENSEN’s manager of sales support and marketing, said the company faced many roadblocks, such as the pandemic and supply shortages — pushing the completion date back nearly two years.

“It took a long four years to get back into our building. It was a difficult situation because we were separated from each other,” Netusil said. “We’ve had several individuals that worked tirelessly to get our building back up and running, and we could not be more thankful for them.”

Founded in Denmark by the Jensen family, JENSEN produces heavy-duty industrial laundry equipment and supplies everything from washing machines, dryers, finishing equipment, garment folders and more. The North American headquarters is based in Panama City. To read more about the reopening, click here.