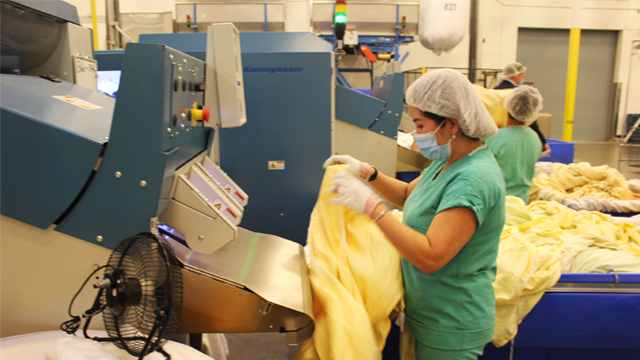 As the shortages of protective garments in hospitals in 2020 fade from memory, healthcare providers are reverting to their pre-COVID preference for disposable isolation gowns and other personal protective equipment (PPE), according to several operators and supplier partners that we contacted recently or who’ve spoken publicly on this topic.

Speaking at a recent forum sponsored by the American Reusable Textiles Association (ARTA), Karl Fillip, CEO emeritus of NOVO Health Services, Atlanta, told attendees that he’s countering this move to disposables by documenting how reusable isolation gowns can save hospitals money. The goal is to encourage healthcare providers to use a mix of reusables and disposables. He described how hospitals kept saying they’d return to disposables when the crisis abated because they were less costly. This inspired NOVO to conduct a detailed financial analysis that documents the savings associated with reusables. “We developed a program where we wanted to blend disposables and reusables as a strategy,” Fillip says. “We went through many of the benefits and positive effects of reusables to the environment as well as the healthcare community. The most important thing is the robust cost-accounting program that proves, quantifiably, that it is less dollars on reusables. In other words, we have the opportunity to change the narrative and move that forward.”

One area of savings with reusable “iso gowns” is the fact that a single reusable garment can take 75-plus washings. But while winning over hospitals based on cost advantages is one way to advance reusable PPEs, another is pursuing new markets that emerged during the pandemic. Shelley Petrovskis, director of marketing for Lac-Mac Ltd., a textile supplier based in London, Ontario, Canada, cited this development during her ARTA panel presentation. Specifically, she noted that dental offices and surgical centers, nursing homes and rehab centers are now more amenable to using reusable PPEs than they were pre-pandemic. Since the supply crisis has abated, many of these organizations say they intend to stick with reusables, she says. “The feedback that we received – particularly from the dental market – indicates that those who adopted reusable gowns during COVID have continued with reusables,” she says.

If the case for reusable PPEs in various healthcare settings is so compelling, why are many healthcare organizations reluctant to cut back on disposables? Bill Moyer, vice president, marketing services, for Hospital Central Services Cooperative Inc. (HCSC), Allentown, PA, cited several factors, ranging from the generous promotional budgets of disposables manufacturers to issues of practicality and comfort. “One of the largest drawbacks that we’ve seen in preventing the greater adoption of reusable gowns seems to be the lack of comfort in general for longer wear-duration periods compared to disposables,” Moyer says.

Another operator, Paul Jewison, vice president of engineering for Healthcare Linen Services Group (HLSG) and general manager of Textile Care Services, Rochester, MN, cited the additional labor and management resources required to maintain a mix of reusable and disposable PPE in a hospital. “My thinking is that they’re going to stay with disposables because the world’s changed,” Jewison says. “There’s not as much labor required for disposables. If you want to do a reusable program, it takes more labor.” Specifically, Jewison described the steps needed to separate reusable from disposable goods, and the need for special handling, including sterilization in an autoclave system. “When you add it all together, it’s a very labor-intensive project,” Jewison says.

Several operators suggested that some form of government mandate is needed to boost the reusable PPE market for healthcare. Many would favor a move by Congress or healthcare regulators to require healthcare providers to include a mix of reusable and disposable PPE as a hedge against future shortages. TRSA is active on this front with Vice President of Government Relations Kevin Schwalb. He is working with congressional allies such as Sen. Tim Scott (R-SC) and officials at the Centers for Disease Control and Prevention (CDC) to enact a mandate requiring hospitals to include reusables as part of their PPE programs. “The linen, uniform and facility services industry can prevent future shortages of PPE, if they’re properly incentivized,” Schwalb said. “We are working with Sen. Scott and others in Congress and the CDC to have the agency recommend that hospitals maintain a 50-50 mix of reusable vs. disposable operating stock.”

This article was adapted from a longer piece that will appear in the March edition of Textile Services magazine.