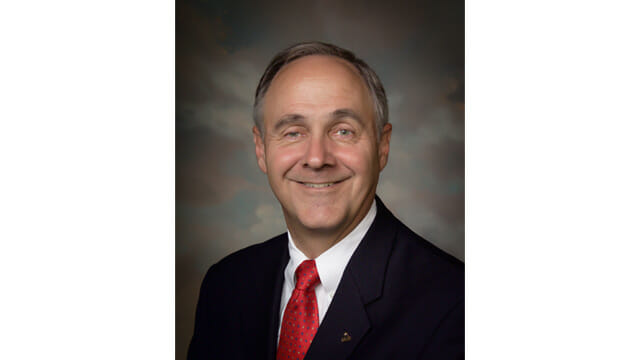 Forty-five years ago, Magnus III completed his business degree and joined the ranks of M&B Hangers, the company co-founded in 1943 by his grandfather, Milton M. Magnus Sr. Over the years and during many shared lunches, Magnus III learned all aspects of the business from his father, Milton M. Magnus Jr., who was then president of the company. Under the leadership of Magnus III, M&B Hangers has grown and diversified, and is now the only full-line hanger manufacturer in the United States. M&B Hangers operates manufacturing plants in Leeds, AL, and in Piedras Negras, Mexico.

TRSA Chair Jim Buik, Roscoe Co., Chicago, noted that the Executive Committee’s decision, “Gives us tremendous pleasure to recognize Milton’s contributions and support of the linen, uniform and facility services industry with the TRSA Maglin/Biggie Lifetime Achievement Award, bestowed only upon professionals in recognition of their exceptional personal service to our industry and to the associations that serve the industry.”

Magnus III is a longtime, active member of TRSA. He promotes TRSA’s value to the industry, supporting the association through personal involvement and enabling his company’s management to give their time to TRSA activities. He’s been an active supporter of TRSA’s advocacy efforts and is one of TRSAPAC’s strongest supporters, donating annually to ensure the linen, uniform and facility services industry is well represented in front of policymakers. Magnus III has served on a variety of committees and currently chairs the associate committee. He also is a current member of the TRSA Board of Directors.

The award is named for the late Rudolph A. “Rudy” Maglin, a chemical supplier who finished his career with Dober Group (Spindle Technologies), Woodridge, IL; and James Biggie, the launderer-turned-garment-identification specialist for Penn Emblem Co., Philadelphia. Since 1987, Lifetime Achievement Awards have been given to 22 individuals from associate member companies.

To learn more about the TRSA Maglin/Biggie Lifetime Achievement award and review past recipients, visit www.trsa.org/awards.