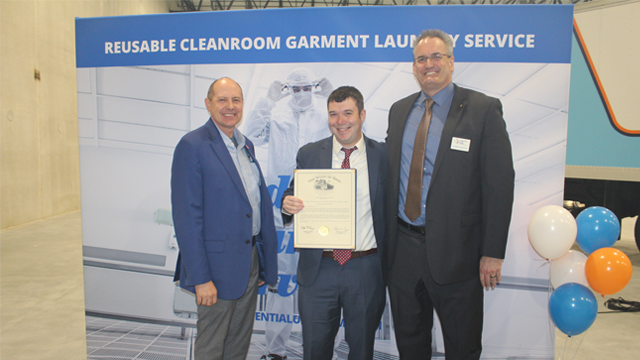 “We’re very excited to be here,” said Welch, in brief remarks to a crowd of about 50 area officials and civic leaders from Heath, a city chartered in 1965 with a current population of roughly 10,500 people. “This site will provide cleanroom laundry services for high-tech industries that operate and manufacture in controlled environments like semiconductor, pharmaceutical, bioscience, aerospace, education, electronics and related industries.”

A likely factor in the plant’s site location was news announced earlier this year that Intel Corp., Santa Clara, CA, is building two computer-chip manufacturing plants in Jersey Township, roughly 20 miles from Heath. These plants represent a $20-billion investment in the world’s largest factory for producing computer chips, according to local news reports. The plants will employ 3,000 people with an average salary of $135,000 annually. Production is slated to begin in 2025.

Prudential’s new cleanroom facility will come online well before that, in the fourth quarter of 2023, Welch said. The building – part of a $35 million investment by the laundry operator – was constructed on “spec” by real estate developer Rob O’Neill, president of Southgate Corp., Newark, OH. O’Neill told attendees he’s constructed 50 similar building for various companies in recent years as business opportunities in the area have grown. He thanked city officials for their support, as well as Prudential for coming to Heath. “This morning is a great day,” O’Neill said. “Prudential Cleanroom Services probably wouldn’t be here if it weren’t for a speculative building like this. There’s a lot of work that goes into getting a company here. We had the support of the city council passing a resolution of support. This community is fortunate to have so many of the pieces here to attract a company like Prudential.”

Mayor Mark Johns (D) offered his thanks as well to Prudential and other dignitaries gathered in the new plant. “To Prudential Cleanroom Services, welcome to the Midwest, welcome to Heath, Ohio,” he said. “We’re excited for this opportunity and what we see in Ohio’s vertical integration. That’s occurring with Intel and creating a new industry from the ground up, based in Licking County (OH).”

Prudential, based in Irvine, CA, has not yet begun installing equipment in its new facility. During the news conference, a Prudential delivery truck was parked behind the podium and chairs, along with banners promoting the company’s services. Prudential Cleanroom Services has serviced routes in Ohio for many years.

In an interview after the news conference, Mayor Johns said his area is growing, thanks in part to support from local government, which approved a 15-year tax abatement on any improvements that Prudential makes to the property. “Central Ohio is a bit of an outlier in the Midwest,” he said. “Whereas there are a lot of areas of the Midwest where the population is falling, central Ohio’s population is increasing. Those are very important things for employers, including those in the high-tech industry.”

As for staffing the new plant, Mayor Johns said that while workforce shortages are a national challenge, he’s confident that Prudential will find the staff it needs. “The people in our area work hard,” he said. “They’re reliable. They show up every day.”

Initially, Welch said that the plant could employ up to 150 people. While pay will vary by job, all employees will earn above Ohio’s minimum wage of $9.30 an hour. The company’s goal is to find staff who want to make a long-term commitment. “We look for career people,” he said. “We only employ full-time employees, and we want them to invest in their future and ultimately come in and retire from the company. A lot of us at Prudential have been with the company for many years. It’s a 90-year-old company that continues to be vibrant today. We want people to be a part of that environment.” Welch added that local officials’ provision of industrial-scale utility connections for water, sewer, electricity and natural gas was a major plus for the new location.

The news conference drew coverage from several area print and broadcast news outlets (see links below). Prudential Vice President of Sales and Marketing Jerry Martin closed the news conference with a brief question-and-answer session with reporters. Questions centered on jobs and details of the tax-abatement program, plus Prudential’s commitment to environmental compliance. On the latter point, Martin noted that, “This is all reusable textiles, so they’re much better than disposables, or ‘one-time-use products.’ Our business itself is ‘Clean Green,’ and we are Clean Green certified through the Textile Rental Services Association (TRSA). We’ll bring that same model to this facility.”