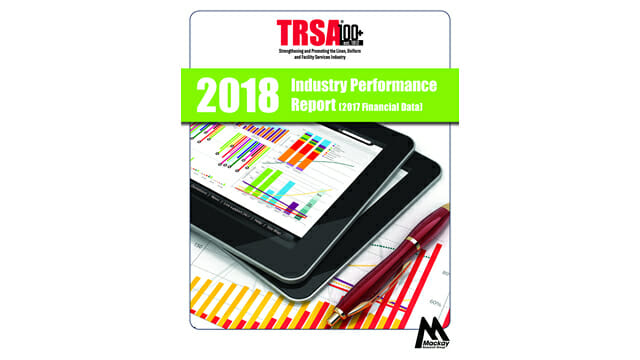 TRSA recently unveiled the 2018 edition of its Industry Performance Report (IPR). This annual publication compiles data from TRSA operators on a confidential basis in order to produce a report that offers insights on key metrics, including productivity, costs, profitability, staff turnover and more. A total of 41 companies participated in the study, which aggregates information based on company size and sector of the industry, including industrial, mixed, healthcare and food & beverage (F&B).

A noteworthy point in the report, compiled by Mackay Research Group, Boulder, CO, is that it shows profitability figures in each industry sector exceeding that of the growth total for U.S. gross domestic product (GDP). The second-quarter GDP figure from the U.S. Department of Commerce’s Bureau of Economic Analysis shows a growth rate of 4.2%, a healthy sum. Profit margins for the four commercial laundry sectors noted above scored higher, with F&B at 6.9%, industrial at 11.6%, healthcare at 7.7% and mixed (i.e., some combination of the previous three) at 9.3%. All figures in the IPR are based on 2017 data.

TRSA President and CEO Joseph Ricci praised the new IPR as a critical resource for linen, uniform and facility services companies seeking to benchmark their performance against comparable businesses.  “Companies that are competing effectively in their markets naturally want to know not only their own performance numbers, but how they stack up against comparably sized competitors,” he said. “This 2018 Industry Performance Report goes a long way in helping them do just that. In fact, there’s nothing comparable in this industry that does more to help with benchmarking performance.”

Study author John R. Mackay notes in the introduction to the IPR that nearly all the figures included in the study are based on median scores of the participating companies. “The median for a particular variable or calculation is the middle number of all values reported, from lowest to highest,” he wrote. “The median represents the typical company’s results.”

The IPR allows operators to benchmark productivity, efficiency and financial performance against operators of similar volume, product mix and markets, including healthcare, industrial, F&B and mixed.

The IPR also includes detailed information on expenses, revenue and energy costs, along with productivity per pound processed and financial performance statistics, such as asset turnover and a five-year profitability trend analysis by sector. For all these reasons and more, the IPR is a critical benchmarking tool for every company in the linen, uniform and facility services market.

Additional examples of key metrics featured in the IPR include:

Companies that contribute data for use in the IPR receive a copy of the final report at no charge. Participating companies also get a complimentary bonus in the form of a customized report specific to their operations.