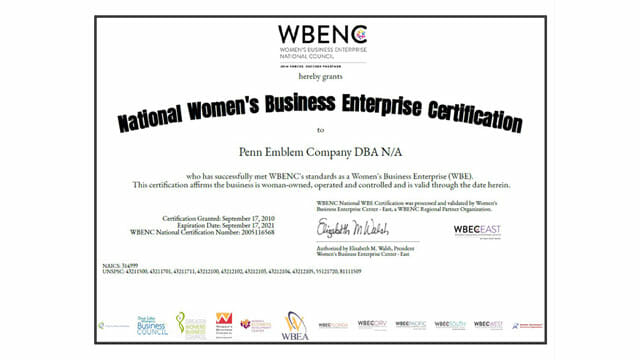 Penn Emblem Co., Trevose, PA, recently renewed its Women’s Business Enterprise National Council (WBENC) Certification for the 2020-’21 year, making this the company’s 10-year anniversary with the WBENC, which is “the largest certifier of women-owned businesses in the U.S. and a leading advocate for women business owners and entrepreneurs.” The organization strives to not only certify women-owned businesses, but also connect members for business opportunities, according to a news release.

WBENC certification denotes that a business is 51% owned, controlled, operated and managed by a woman or women. In 2010, Randi Blumenthal-Joseph, granddaughter of Penn Emblem’s founder, became the third generation of leadership, while also shifting the company to become certified as a Woman’s Business Enterprise, to better support clients focused on supply chain diversity, and to proudly represent female leadership, the release noted.

In addition to business networking, the WBENC also provides educational seminars, workshops and resources, a network of support and eligibility for various awards and recognitions. For more information on getting certified with WBENC, visit wbenc.org.