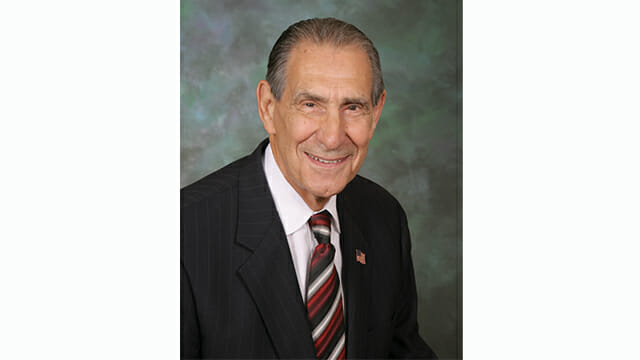 Roger F. Cocivera, 87, whose 68-year career in the linen, uniform and facility services industry began with a job washing trucks for Penn Linen in 1951 and included the co-leadership of that company as well as service as president of TRSA, passed away early on Aug. 6, due to an illness.

“We are saddened by the loss of our colleague and friend, Roger Cocivera,” said TRSA President and CEO Joseph Ricci, who succeeded Cocivera in March 2010. “Few gave more or did more for the good of the industry, or for the organizations for which they worked, than Roger. After leaving TRSA, he remained active with PMI (TRSA’s Production Management Institute) including addressing graduates in 2016. He stayed in contact with the organization through his friend of more 45 years, retired TRSA Director of Industry Affairs Bill Mann. Roger will be missed by many in our industry and beyond.”

Three laundry industry colleagues who knew Cocivera for 40-50-plus years, praised him as an industry advocate, educator and turnaround expert. “Roger gave his all,” said Pat Dempsey, chairman of Dempsey Uniform & Linen Supply Inc., Jessup, PA. “To the industry, to the association and to the customer. He was a consummate TRSA advocate.”

Donald Struminger, CEO of Mohenis Services Inc., Petersburg, VA, emphasized Cocivera’s dedication to the industry and his desire to educate other operators on best practices. “He was a good guy,” Struminger said. “He loved what he did and he did it well. He had lint in his blood.” Cocivera’s efforts to establish PMI and other efforts, including technical research and developing production manuals, served as an outgrowth of his emphasis on industry advocacy. “He was always interested in teaching and sharing his knowledge,” Struminger said. “His heart was always in the industry.”

Michael Potack saw that dedication firsthand when Cocivera became chairman of the TRSA Board of Directors in 2005. In his view, Cocivera operated like a turnaround expert. He saw the need to improve a TRSA that was “moving sideways or down.” “I think the thing is, he was brave,” said Potack, chairman of Unitex, Elmsford, NY. “He jumped in where the industry, associations, everything was falling apart. He just walked in and said ‘Let me fix this. How can I help?’ And just did it quietly. No bravado, no big noise.”

Cocivera began working in the laundry business while still in high school, when he took a job with Penn Coat and Apron in Allentown, PA. During the next 50 years, he rose through the ranks in the family company owned by Max Stettner; they became business partners and operated Penn Linen, Penn Healthcare and Tartan Textile Services. “Roger is the kid who worked hard and made it,” Stettner, who passed away in 2013, said in an article announcing Cocivera’s receiving an Operator Lifetime Achievement Award in 2001.

Cocivera earned that recognition for his work with Penn as well as a long list of activities he pursued on behalf of TRSA. Most prominent among these was the founding of PMI, which now bears his name. Today, PMI is firmly established as the leading professional development program for linen, uniform and facility services production processes.

Cocivera chaired a task force that established PMI. In an April article in Textile Services magazine, he described the drive to launch PMI, which marks its 30th anniversary this month. “Everybody said, ‘It can’t work, Roger,’” Cocivera said, recalling how industry leaders felt the program wouldn’t succeed because it was initially based at a women’s university in Texas. With characteristic boldness, Cocivera forged ahead anyway.

Cocivera contributed to a number of other association volunteer efforts, including the chairmanships of the Plant Operations Committee and the Research and Development committees.

After retiring from Penn Linen, Cocivera joined TRSA in a staff role in May 2002 as vice president of industry affairs. He advanced to the post of interim president on Feb. 1, 2005, and was named president two months later by the TRSA Board of Directors during a meeting in Charleston, SC. Thus began a five-year tenure at TRSA during which Cocivera oversaw a period of growth and change that culminated in the “blending” of TRSA and the Uniform & Textile Services Association (UTSA) in October 2008.

Potack credited Cocivera with boosting TRSA’s image and programs during his tenure. “When we worked with him, he was always prepared,” Potack said. “There were no surprises. He knew what was going on. He was the guy you’d like to have as a neighbor. He’d help you. ‘Hey Roger I’ve got a leak in my kitchen sink. What do you think?’ ‘I’ll be right there with a wrench.’ If he didn’t know how to fix it himself, he knew someone who did. I think he was comfortable with every level of manager in the industry.”

As for outreach, Cocivera would talk up TRSA membership and programs to anyone … anywhere, anytime. He never doubted that he could convince a prospect of the value of participating in TRSA and/or attending association events. “There’s no place he wouldn’t go,” Potack said. “Some guys he knew for 100 years, and some guys he never knew. He just walked in and gave them the spiel. No question. He believed in it. He was in 100%.”

Dempsey said some prospective members may have found Cocivera’s arguments for joining TRSA a bit strong, but there was no holding him back. “An awful lot of people in the industry didn’t have Roger’s passion,” he said. “The passion is what drove his advocacy.”

Cocivera continued to work in the industry after stepping down from TRSA. He served well past the traditional retirement age as a senior partner in CoBe Consulting LLC, in Whitehall, PA. “He never slowed down,” Struminger said. “He was always full of energy.”

Before launching his career in the laundry industry, Cocivera was a basketball standout at Kutztown University, where he graduated with a B.S. degree in education. He also completed a program at the University of Houston Executive Development Institute.

Along the way, in business and in life, Cocivera made a strong impression everywhere he went, especially among industry colleagues. “I’m thankful for having known Roger Cocivera,” Dempsey said. “He was a real strength in our industry. And our country.”

A celebration of life for family and friends will begin from 10-11 a.m., Wednesday, Aug. 21, with a calling hour at St. John’s United Church of Christ, 575 Grape St., Whitehall, PA 10852. A dedication will follow at 11 a.m. In lieu of flowers, the family would welcome charitable contributions to the American Cancer Society. To make a gift in Cocivera’s name click here or call 800.277.2345 or write: