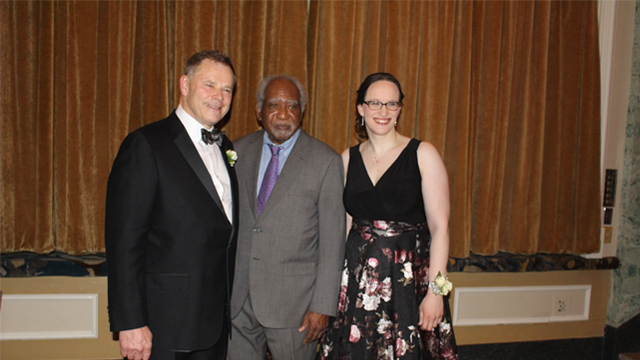 The Roscoe Co., a Chicago-based independent industrial launderer, formally marked its centennial on April 16 with a dinner program at the Drake Hotel downtown. The celebration – delayed by COVID-19 concerns – highlighted the family-owned company’s roots in the North Lawndale community on the city’s west side, which has faced social and economic challenges in recent decades.

In a keynote address, U.S. Rep. Danny Davis (D-IL) praised Roscoe for its commitment to corporate social responsibility as well as business success by working with him and other officials to help the neighborhood revive. “When I came to Chicago in 1961, there were 125,000 people living in the North Lawndale community,” Rep. Davis said. “Now I would say there are probably less than 50,000. Many of the businesses moved, but Roscoe has remained right there on West Harrison Street, all of that time.”

A theme of the evening was the team pride that has fueled Roscoe Co.’s success since its founding in 1921 by George C. Buik and John P. O’Connell. President and former TRSA Chair Jim Buik, the longtime leader, shared emcee duties with his daughter Julia. A fourth-generation manager, she joined the company full-time in 2016 after graduating from Marquette University. Currently, Julia oversees the Roscoe Co.’s information technology department. Speaking with poise and wit, she thanked all who’ve assisted her at Roscoe. “I’d like to thank my dad, my mom, my brother and my sister-in-law for all of their love and support as well as my whole extended family – all of you who have known me since my mom had a baby shower in Roscoe’s lunchroom.”

Julia then pointed with pride to a Roscoe tradition: the company’s 20 Year Club. Specifically, she announced that Parul Modi, the plant’s stockroom peer leader, is the newest addition to this group of 200-plus current and former employees. Launched in 1955, Julia noted that, “We’ve been celebrating for every five years ever since, but the 20 Year Club gets to celebrate every year with an awesome dinner and camaraderie.”

Rep. Davis said the 20 Year Club program is part of what makes Roscoe and its 67-member team unique. “When you’ve got that many people staying at the same company, working with the same group for 20 years or more, that’s an indication that there’s something special,” he said. Rep. Davis also cited his longstanding ties to the Buik family, including Jim’s father, Donald W. Buik, who served for many years as the second-generation chief executive of Roscoe. The program included an announcement of an honorary renaming of 3500 W. Harrison Street, the block on which the company is located, as “Donald W. Buik Way.” Rep. Davis described the father and son team as so similar in their approaches to business and community life that they seem like clones of each other. He also congratulated Jim and his staff, noting that “Teamwork makes the dream work.”

The accomplishments of the entire Roscoe family were chronicled in a brief video on the company titled Roscoe: 100 Years of Impact that aired during the program. “For over 100 years, Roscoe has been a fixture in the Lawndale community,” a voiceover said. “Over the last 60 years, when many businesses and jobs moved to the suburbs, Roscoe chose to plant deep roots and give back to the community that helped them thrive.” The company has contributed in many ways, from pioneering wastewater treatment in the early ’70s to supporting school supply drives, providing holiday gifts to local children and partnering with the United Way and other organizations. The video also cited a recent high-profile act of Roscoe philanthropy: Its backing of the renovation of a lion exhibit at the Lincoln Park Zoo. Julia noted that this gift had recently earned Roscoe a Community Service Award from TRSA.

This spirit of community – coupled with entrepreneurial drive – has helped Roscoe thrive amid widespread consolidation in the linen, uniform and facility services industry. And like the lion exhibit, which Julia noted has recently added a new cub, Roscoe continues to grow thanks to its dedication to quality and service. Jim offered his gratitude for this success, not only to his customers and employees, but to supplier partners and outside advisers for their assistance. “Without them there’s no way this business would have continued,” he said. “There’s no way, year after year, we get stronger and go up against multinational billion-dollar corporations. We’re a little pipsqueak on the west side of Chicago. But we roar!”

Acknowledging support of family and praise for long-term employees

Kannegiesser ETECH presents a gift for the ages