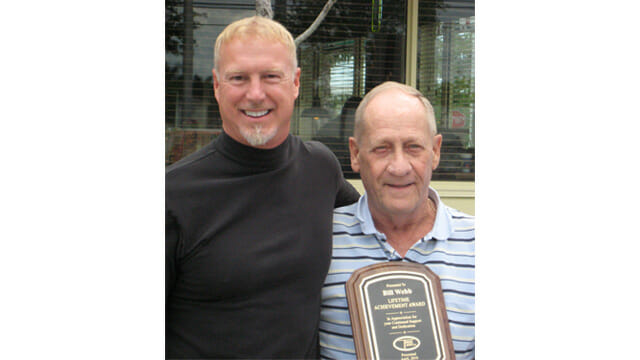 William “Bill” Webb passed away on May 11, according to a news release from Tingue, Brown & Co., Skokie, IL. Webb gave a lifetime of service to the linen, uniform and facility services industry.

In the release, the company had these remarks about Webb’s start in the industry and at Tingue, “To say that Bill had an impact on our industry would be a tremendous understatement. Tingue, Brown found Bill working at Model Laundry in Cincinnati, where he had been since he was nine years old. If there had been child labor laws in place, Bill would have fought them himself – because Bill loved to work! With only a little convincing, Bill joined the supplier’s side of the business. Bill did an outstanding job representing Tingue, Brown & Co. in his Midwest territory. He made many friends and built a great territory.”

Webb and Ed Curran founded C&W Equipment in 1976. C&W helped professionalize the world of rebuilt and used equipment, the release said. Webb left C&W around 1988 to begin other ventures, including consulting work with longtime healthcare laundry operator Eric Frederick as his partner.

After relocating to Florida, Webb was recruited back to the world of padding salesmen to work with Soalco Products Co. He joined the Tingue, Brown family once again after Soalco was acquired by Tingue in 1998. Webb more than tripled Tingue, Brown’s business in South Florida before retiring in 2005.

Even after retirement, Webb was never far away from the industry as his daily calls of inspiration to Tingue reps, new and veteran alike, proved to be great motivators for another generation of supply salesmen. His vast experience was called on regularly. Even as his health was declining, Webb was anxious to help. In 2010, Webb was honored with a Lifetime Achievement Award by President Ty Acton, the only such honor ever awarded by Tingue, Brown.

Webb is survived by his wife, Dee, and children Jeff, Mike, Patty, Dean and Tammy, as well as 10 grandchildren and 10 great-grandchildren. A celebration of life service is scheduled for May 23 from 4-8 p.m. at Tuscany Clubhouse, 2339 Rolling Hills Drive, Covington, KY, 41017.