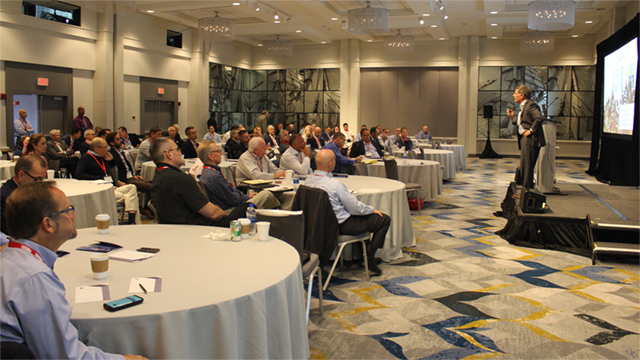 TRSA recently hosted its 106th Annual Conference in Boston from Sept. 17-20. The event drew leaders from the linen, uniform and facility services industry for committee meetings, professional development, teambuilding and industry recognition. Several TRSA committees gathered on Sept. 17, the first day, at the Hyatt Regency Boston Harbor to provide updates on projects and discuss the latest issues of importance to the linen, uniform and facility services industry. Members of the Education, Environment & Sustainability, F&B/Restaurant, Healthcare, Hospitality, Industrial & Uniform, Marketing & Sales and Safety Committees met for the afternoon then enjoyed a welcome reception against the backdrop of Boston Harbor and the city skyline.

After a full slate of committee meetings on the opening day, Annual Conference moved forward on Sept. 18 with its Management Development Day. Designed to develop the next generation of linen, uniform and facility services leaders, the program kicked off with keynote speaker and restaurateur Steve DiFillippo, owner of Davio’s Northern Italian Steakhouse chain, which started in Boston and has expanded nationwide. DiFillippo has deep ties to the linen, uniform and facility services industry with several family members working in prominent roles at UniFirst Corp. For example, his father, Tony was a former president of the company who passed away last year, and brother, David, currently serves as a senior vice president at the corporate headquarters in Wilmington, MA. DiFillippo signed copies of his book It’s All About the Guest following his presentation.

Breakout sessions followed the keynote, covering topics such as:

The final session of the day focused on the steps that linen, uniform and facility services executives should take to implement a successful ergonomics program in their business. Hosted by Stephen Jenkins, senior director of safety and health, Cintas Corp., the session detailed how a focus on ergonomics cuts down on workplace injuries and workers’ compensation claims, and in turn, improves employee morale and productivity. Attendees closed the day with a reception that including time to network and discuss a wide range of issues at the well-attended event.

Sept. 19 combined professional development sessions in the morning with a team building outing in the afternoon that found TRSA members and guests participating in a bit of friendly competition as teams tracked down hidden icons throughout the city, providing a great opportunity to see downtown Boston on a perfect fall day.

At the Sept. 19 Awards Dinner, TRSA chair Jim Buik, president, Roscoe Co., Chicago, presented TRSA’s Lifetime Achievement Awards. The TRSA Operator Lifetime Achievement Award went to Tom Watts, president of Prudential Overall Supply, Irvine, CA. During his acceptance remarks, Watts grew reflective as he told the crowd of nearly 200 people that he felt like the entire industry should receive recognition for its work. However, he graciously accepted the laundry industry’s highest honor, the Operator Lifetime Achievement Award, and in doing so, thanked his wife, Marcy, and Prudential Chairman Dan Clark for their many years of personal and professional support. Watts concluded with kudos to the industry at large, including vendors, as well the association.

Milton Magnus III, president and CEO of M&B Hangers, Leeds, AL, received TRSA’s Maglin/Biggie Associate Lifetime Achievement Award. Amid a heartfelt show of thanks to customers and colleagues, as well as family members who’ve backed M&B for four generations, Magnus said he was surprised when he got word from TRSA President and CEO Joseph Ricci that he’d been tapped by the Associate Executive Committee to receive the award, knowing so many other associate members who are equally deserving of recognition. Magnus added his love of this industry and the work he does has aided in his success, echoing Wednesday’s keynote speaker Steve DiFillippo, who had told the crowd assembled you’ve got to love what you do to be successful.

TRSA’s Next-Generation Executives and Women in Textile Services committees also held their own networking events during the conference.

On Sept. 20, TRSA members elected six new members to the TRSA Board of Directors. For specifics on the results, view article at this link.

Next year TRSA will host its 107th Annual Conference and Exchange at the Westin Alexandria, in Alexandria, VA, during Oct. 20-22, 2020.