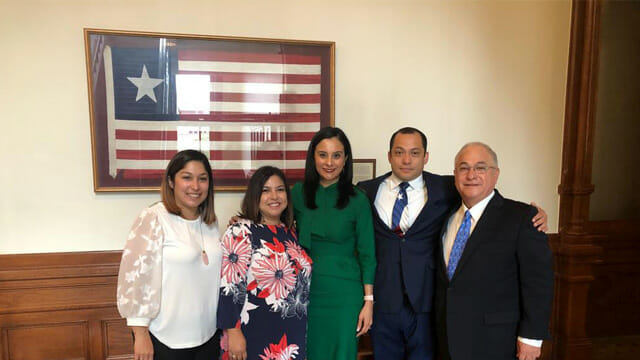 (l/r) Theresa Garcia, Patricia Garcia Luna, State Rep. Ina Minjarez (D), Patrick A. and Patrick R. Garcia pause for a photo in the Texas state capitol on the day that the family owners of Division Laundry & Cleaners Inc. of San Antonio were recognized on the floor of the Texas House of Representatives on the company's 80th anniversary.

In a second recognition ceremony by the Texas state legislature in recent weeks, Division Laundry & Cleaners Inc. of San Antonio was saluted on the floor of the Texas House of Representatives by their local state representative, who praised the company as a large and successful minority-owned enterprise that’s now marking its 80th anniversary.

“Over the last 80 years, Mr. (Peter G.) Garcia’s small business has grown into a successful family business,” said State Rep. Ina Minjarez (D), speaking of Division founder Peter G. Garcia, an immigrant from Mexico. “Under his leadership the family business has become the largest minority and family-owned commercial laundry cleaner in the state of Texas.”

Division, which is currently led by Peter’s son Patrick R. Garcia and his three children, Patricia Garcia Luna, Theresa Garcia and Patrick A. Garcia, received similar accolades in March on the floor of the Texas State Senate. On March 13, State Sen. Jose Menendez (D), welcomed the family to the State Capitol. He described Division as “part of what makes our city great.” Click here to see a video clip of State Sen. Menendez’ remarks.

At the May 6 program at the Texas House of Representatives, Rep. Minjarez also praised the company’s success, while noting as well the passing earlier this year of Patrick A.’s sister Loretta Katherine Robles Garcia, 65. “Today I also want to honor the memory of Loretta Catherine Robles Garcia,” Rep. Minjarez said. “Loretta was known for her kind heart and her family values. She was her parents’ caretaker and a cornerstone in the Garcia family.’

Patrick R. said he and his family, who stood just off the House floor during Rep. Minjarez’ remarks, were extremely moved by her praise for both the company and Loretta. “I thought it was very kind of our State Representative Ina Minjarez to honor my sister Loretta Katherine Garcia for her contribution to our family,” Patrick R. said. “Standing on the dais and hearing my sister’s name through the House Floor was an emotional time for me.  Even more so when everyone was asked to stand for a moment of silence and prayer as I miss her so much.”

Rep. Minjarez said she values the company and its owners as people she feels privileged to represent. “Division Laundry is a business I am proud to have in the district, and I am honored to call the Garcia family my friends and constituents,” she said. Click here to see a video clip of State Rep. Minjarez’ remarks.

Patrick R. said he was honored to have Division and his family recognized for a second time this spring by the Texas legislature. He credits his father’s vision with the success of the company, which is now in its third generation of family ownership. “It was a very proud moment to be standing tall with all the confidence in the world facing the House of Representatives alongside the Speaker of the House, to hear our history told once again,” Patrick R. said. “My thoughts came to one conclusion. It was my father’s principles that built this business to what it is today. They are: promoting and delivering exceptional service that our customers can trust through sincerity, fairness and dedication, firmly established in our work ethic.”