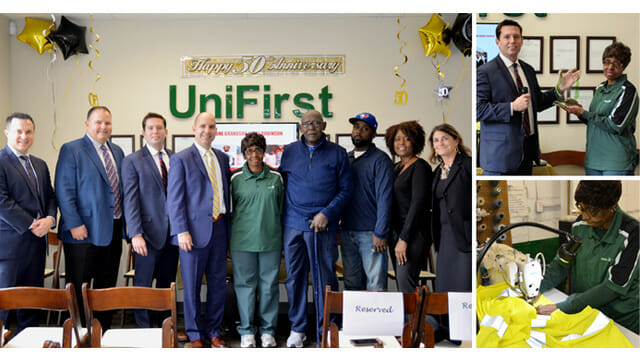 UniFirst Corp. recently honored its longest serving full-time employee team partner, Mittie Barber, who recently celebrated her 50th anniversary with the company. UniFirst held a surprise celebration at the Dothan, AL, plant where Barber works as a uniform and garment mender, according to a news release.

UniFirst President and CEO Steven Sintros, Executive Vice President Cynthia Croatti, and other executives from the company’s corporate headquarters in Wilmington, MA, made a surprise appearance at the celebration, where they commended Barber’s dedication to UniFirst and thanked her for her five decades of service and loyalty.

“We’re excited to celebrate Mittie reaching the 50th anniversary milestone,” Sintros said. “Mittie embodies the traits that help make UniFirst a leader in our industry: hard work, commitment and treating others the way you want to be treated. She is a great role model for future generations of UniFirst team partners and we’d like to personally thank her for her daily contributions to our company.”

Barber started her career in 1969 as a shirt presser when the UniFirst Dothan facility was a local dry-cleaning business. To put it in perspective, the year Barber began her employment at UniFirst, Apollo 11 landed on the moon and Neil Armstrong took those first historic steps. It also was the year that Richard Nixon was sworn in as the 37th president of the United States.

“Time has flown by and I feel like I have been blessed because the lord has allowed me to get up and come to a job every day, whereas some people don’t have a job to go to,” said Barber, who revealed that she is not slowing down and plans on continuing to work to help pay for her grandson’s college education at Auburn University. “It’s all for love, for love and my grandson’s education.”

UniFirst purchased the Dothan dry-cleaning business in 1986 and transitioned it into a UniFirst industrial laundry business, and Barber was promoted to her new garment mending position – a role in which she continues to excel in today, the release noted.

“Mittie is the cornerstone of our location and continues to set the example of hard work and dedication to our company,” said UniFirst—Dothan General Manager Clint Bell. “Her experience and talents are invaluable to us. She proactively identifies and addresses potential problems before they happen and always has our customers in mind. She takes pride in working for UniFirst all these years and it is evident in her work. She is simply the best!”