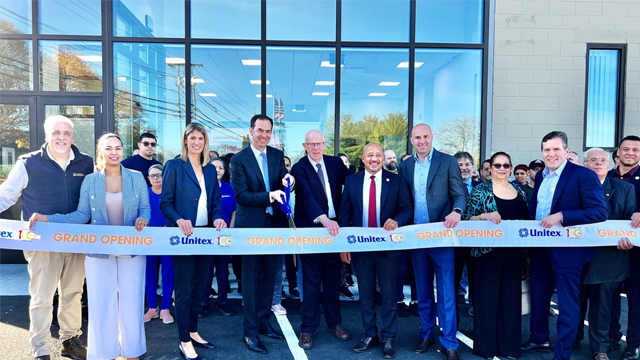 The Nov. 4 event featured speeches by U.S. Rep. Lori Trahan (D-MA); Massachusetts State Sen. Barry R. Finegold (D-2nd Essex and Middlesex); Lawrence Mayor Brian A. DePeña (D); and council members from the City of Lawrence. At the gathering, Potack was presented with proclamations welcoming Unitex to Lawrence, including one from Joe Bevilacqua, president of the Merrimack Valley Chamber of Commerce.

“This used to be an abandoned building and now you’ve got a company like Unitex that’s creating 400 jobs in today’s economy,” Bevilacqua said. “On behalf of the Merrimack Valley Chamber of Commerce, we commend Unitex on their grand opening, and we want to say thank you for your continued good work. And we know that jobs here are going to grow and grow, and we’re here to help you.”

“Despite this challenging time in the world, we are thankful and excited to have put the pieces in place to open our doors in Lawrence,” Potack said. “The dedication and resiliency demonstrated by our team, with the support of countless supplier partners, made this ambitious project possible. As we celebrate our 100-year anniversary this year, we are excited to work with our new customers in the market and play an important role in the Lawrence community in many different ways.”

Rep. Trahan added that, “What really excites me about today is the opportunity for every new worker who will be hired in the coming months, to not only have a good-paying job that empowers them and supports their family, but also the chance to put down or strengthen roots right here in the Merrimack Valley. I’m going to be bringing your success story back to Washington with me so that my colleagues know what you’ve built here.”

Located at 155 Shepard St. the Lawrence location includes Unitex’s first facilities in the Massachusetts market. With this expansion, the company will be able to serve the linen and uniform needs of ambulatory care and outpatient medical facilities in Massachusetts, as well as parts of Maine, New Hampshire and Vermont. The new facility will operate alongside the healthcare processing facility that opened in 2020, adding 97,000 square feet of production space. The facility will employ more than 400 local people and will produce more than 85-million lbs. of clean linens and uniforms annually.