LaundryESP® has documented our industry’s capabilities in addressing evolving issues and priorities related to pollution prevention and resource conservation.

The Facility Data Survey results reflect our success in protecting the environment and our respect for our customers’ and the public’s interest in green, sustainable business practices. The figures also demonstrate the efficiencies we have realized through technological advances.

All businesses emit carbon because they use electricity: the emissions occur at the facilities where their electricity is generated.  LaundryESP® sums these with forms of in-laundry energy use at textile services facilities to determine the industry’s annual carbon footprint and expresses this as a total of pounds of carbon dioxide per pound of textiles processed. The accompanying graph shows this figure has declined by 24% over 13 years, from 0.47 pounds of CO2 per pound of textiles to 0.36 pounds.

Textile services facilities conserve resources better than ever in part because of washing, drying, wrinkle removal and material handling technologies that enable us to do our job more efficiently. More businesses are choosing textile services facilities to handle their laundry work. Hotels’ and hospitals’ small washrooms are shut down in favor of shipping goods to larger facilities that offer greater economies. Restaurants opt for the benefits of larger scale cleaning for their table linen instead of neighborhood laundries. Other industries see the benefits of outsourcing the care and inventory of their work uniforms to our industry. LaundryESP® shows that we produce more laundry, which takes the strain off the environment from washing and drying taking place in smaller,
less efficient machines.

TRSA member facilities have produced more pounds of laundry per work hour over the years due to laundry employees’ dedication to greater efficiency and effectiveness and management’s commitment to upgrading machinery and operating practices. This increase is also a testimonial to sales growth thanks to employees who visit prospective customers and serve existing accounts; these individuals have done a better job demonstrating their companies’ versatility in enabling businesses to project a clean and attractive public image.

The LaundryESP®  survey reveals a:

Also contributing to this growth was the increase in facility size and efficiencies gained by consolidating accounts into fewer locations. The U.S. economic recession was likely most responsible for the small decline in average facility production since 2006. 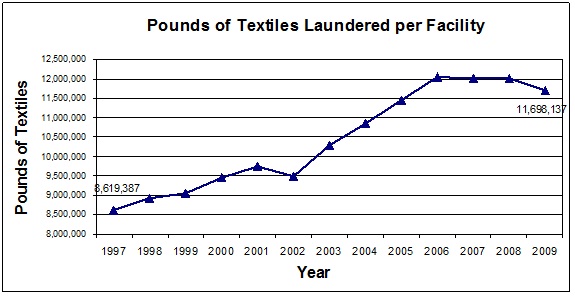 Greater energy efficiencies in laundry processes have been largely responsible for our decreased carbon footprint. LaundryESP® examines the industry’s progress with all forms of energy, calculating British thermal units expended per laundry pound for each individual type of energy and also for total energy (a total Btu basis across all fuels).

Industrial-scale laundries are committed to minimizing their use of natural gas, electricity and other fuel sources to heat water, produce steam, fire burners and otherwise operate their equipment. To ensure maximum efficiency of these functions, they invest in the largest-capacity machinery possible (to generate economies) with the latest energy-saving features. They take an additional step by recovering heat from boiler stacks and wastewater discharges. They emphasize maintenance to keep equipment running smoothly and efficiently. Plus they deploy energy-conserving practices as any business would, including low-power lighting and state-of-the-art heating and air conditioning controls.

If the industry’s energy intensity had remained at its 1997 level, its total energy use in 2009 would have been 40.3 trillion Btus rather than 29.4 trillion Btus. Thus the energy efficiency gain saved 10.9 trillion Btus in 2009. This is the equivalent of the annual residential energy consumption for about 115,000 typical U.S. households (for space heating, water heating, and appliances). 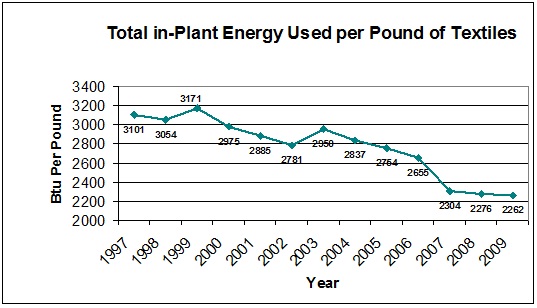 The volume of water that textile services operations use to launder a pound of textiles is one of the strongest indicators of our green impact. When comparing this figure with the same one generated by smaller laundries, such as home machines and washrooms in hotels and hospitals, our conservation capabilities are revealed. We require less municipal water to launder and we experience greater associated efficiencies that serve the public interest, including less energy needed for heating and a larger discharge to sewers, which we filter and thereby enable sewage treatment to operate more effectively.

TRSA members’ conscientiousness about water use has grown in response to supply shortages in municipalities from coast to coast. More rinse water is reused straight from the drain with minimal treatment or recycled by filtering. Members invest heavily in large, multi-compartment washers (“tunnel” or “continuous batch” washing) that process thousands of pounds of laundry simultaneously and reuse water between batches, draining less. TRSA companies are focused on using as little fresh water as possible and cooperating with municipal authorities to ensure the discharge of solids and chemicals in laundry wastewater is compatible with publicly owned treatment works. 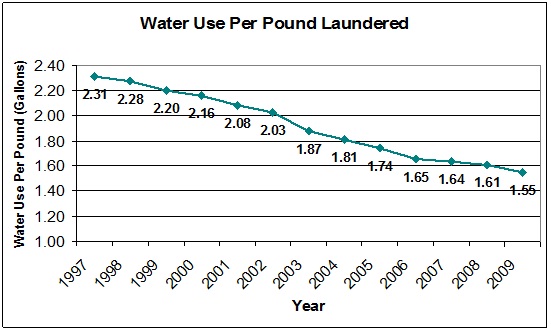