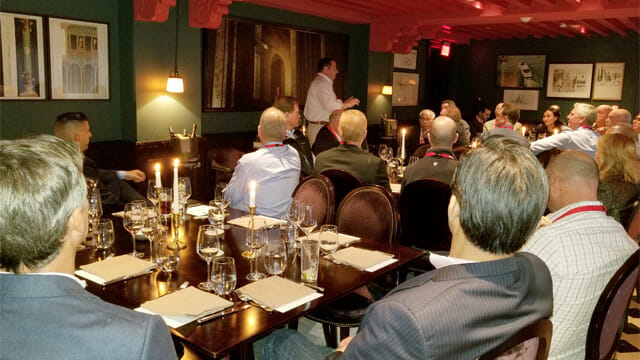 Schwalb provided a briefing on federal and state issues including developments pertaining to Joint-Employer Guidelines and Overtime Exceptions, as well as potential federal-level efforts on infrastructure investment and Waters of the U.S. On a regional level, Schwalb discussed the recent revisions to California’s 35-yeard-old Title 22 prescriptive formula for processing healthcare linens and thanked local members that participated in TRSA’s California Legislative Conference last August and opened their plants for state assembly and senate representatives.

“Without the commitment of local and regional members to help educate and put a local face on these issues, TRSA would not be able to accomplish its advocacy objectives,” Schwalb said. He further outlined resources available to communicate these new guidelines to healthcare customers across the state.

Schwalb highlighted TRSA’s investment in several states to retain local legislative consultants including 2019 efforts to revise the tax codes in Texas, combat “Congestion Taxes” in New York and revise legislation to allow employee paycheck deductions for “rental uniforms and garments” in Indiana. He also introduced Cervantes, TSRA’s California legislative consultant to highlight issues in the state impacting the industry including:

TRSA’s investment in California and other states has become even more critical as the federal government reduces financial commitments to states and minimizes regulatory efforts requiring the states to undertake new revenue-generating initiatives and state-level environmental, labor and other initiatives.

At the end of this presentation, attendees will be able to:

– Confidently discuss the similarities and differences in bullying and harassment, and bullying and workplace violence
– Understand negative behaviors as a social phenomenon that includes peers, leaders, and organization’s culture
– Conduct a simple survey to determine the climate, and use the results to make a business case and create an action plan for positive workplace culture
– Implement a healthy workplace policy that has buy-in from employees
– Use company core values to drive and measure behavior
– Create a better, more powerful harassment prevention training program
– Use the three steps of intervention to help abrasive leaders change their ways

This webinar is the third in the TRSA Business Restart Series brought to TRSA members for FREE by Six Disciplines Consulting Service.

Presenters: Six Disciplines Consulting Service leadership Eric Kurjan and Audrey Carmichael will provide instruction and use of best practices and appropriate tools to aid in the restarting your own organization, including these topics:

– Supply Chain and Inventory
– Accounts Receivable Management
– Staffing and Operations
– Customer Retention
– Communications – Internal and External Plan
– Future Strategic Planning – what to do next
– Tool overview – where to download, how to use
– Question and Answer Session