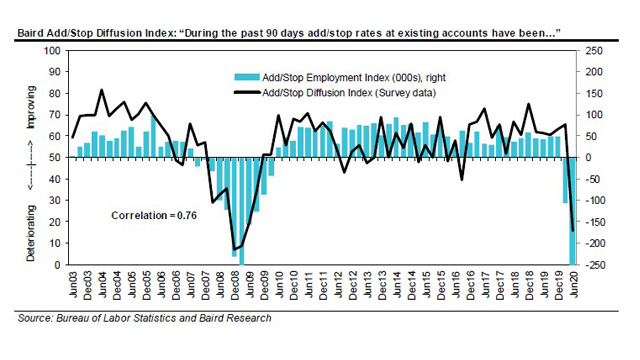 In a one-hour TRSA webinar that aired on July 8, Wittmann and Hauke began their presentation with an update on financial markets. They used measures, including the U.S. dollar, the S&P 500, the U.S. Treasury’s yield curve, and the Federal Reserve’s balance sheet to gauge the health of the financial markets and describe recent trends in each of these areas. In the last month, the U.S. dollar has weakened, largely because the U.S. has fared poorly during COVID-19 compared to other developed countries. The S&P 500 index indicates that the stock market has almost fully rebounded to its pre-COVID condition. The Treasury yield curve has resumed a normal shape, due to the Federal Reserve cutting short-term interest rates. Wittmann and Hauke anticipate that interest rates will remain low for the foreseeable future. In addition to cutting interest rates, the Fed bought bonds from the Treasury to fund the CARES Act (a major stimulus-funding bill). The Federal Reserve’s balance sheet has ballooned in the wake of the pandemic.

The U.S. economy officially entered a recession in March and April as defined by the Economic Advisory Board, and it’s uncertain whether or not we are still in a recession. The shelter-in-place orders and other shutdown actions taken earlier this year delivered an unprecedented shock to the economy. The sharp decline in personal consumption, which typically accounts for roughly 70% of GDP, was the biggest contributor to the downturn. More recently, retail sales growth has rebounded, driven by online sales. A combination of reopenings and stimulus benefits has sparked a surge in consumer spending, which has raised concerns that retail sales could contract once the stimulus resources are depleted.

Beyond their review of consumer spending trends, Wittmann and Hauke assessed other economic indicators, including housing, mortgage-rate defaults, inflation and unemployment. Nonresidential construction also has slowed, but housing has fared well, both new and existing homes. Housing sales are rebounding due to pent-up demand, coupled with low mortgage rates. Banks are concerned about a potential spike in mortgage-rate defaults due to the high unemployment rate. The Coronavirus Aid, Relief and Economic Security (CARES) Act has temporarily protected borrowers, but as many as 30% of Americans with home loans (15 million households) are considered at risk to stop paying their mortgages. While energy and commodity prices have fallen, consumer prices for many consumables, particularly food, have increased. Most of the inflation, however, remains in the financial markets. The industrial economy had been weakening even before COVID hit; the manufacturing Purchasing Managers Index (PMI) has remained in negative territory since August 2019. Now, industrial production is in a deep contraction.

The coronavirus pandemic caused a surge in the unemployment rate. Since its peak, joblessness has declined slightly and stabilized, but it remains at high levels. It peaked at 14.7% in April and is currently at 11.1% (June). Labor trends in textile markets (which includes linen, uniform and facility services markets) reflect similar trends as the national labor market, with hospitality hit particularly hard.

Wittmann and Hauke’s analysis also included reviews of the performance of Cintas, Unifirst, and Aramark. Although the uniform sector’s stock performance lagged in comparison to the broader market, stock prices have recovered. Cintas released a business update in May. Their earnings expectations have fallen by 25%. Direct sales are down about 50%, rental revenue is down in the high teens, and fire and safety revenue is down in the mid-single-digit range. Because of a demand for personal protective equipment (PPE), first-aid revenue trends are up 9%. Free cash flow has held positive throughout the COVID-19 crisis. With Aramark, pay cuts, furloughs, and layoffs have limited decremental margins to about 20%. Food business revenue, which is a major portion of Aramark’s business, is down 50%. Unifirst’s weekly revenue in April was down in the mid-teens; now, it is down in the mid-single digits. Unifirst’s pace of reopening and recovery has recently stalled. They have had high PPE and COVID-related compliance costs, so margins should improve as many COVID-related pressures subside.