Restaurants to Congress: Our Recovery is Moving in Reverse 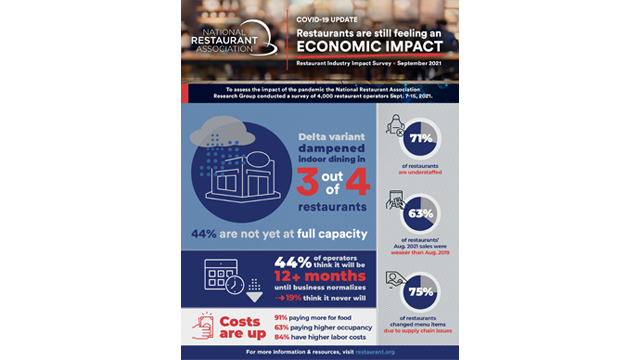 The National Restaurant Association recently sent a letter to congressional leaders sharing discouraging new operator survey findings and warning of harm that provisions of the Build Back Better Act (BBBA) could inflict on restaurant industry rebuilding, according to a news release.

“Our nation’s restaurant recovery is officially moving in reverse,” said Sean Kennedy, executive vice president of public affairs for the National Restaurant Association. “The lingering effects of the Delta variant are a further drag on an industry struggling with rising costs and falling revenue. We support many of the goals of the Build Back Better Act, but the legislation is too large and too expensive a check for small businesses to take on. Restaurants still need help today and overwhelming them with costly new obligations will only prevent progress in turning the tide of recovery.”

The letter outlined the association’s opposition to several tax changes being considered as part of the budget reconciliation bill that significantly increase tax obligations and an effort to make drastic changes to the enforcement of the National Labor Relations Act (NLRA). It also urged Congress to replenish the Restaurant Revitalization Fund (RRF).