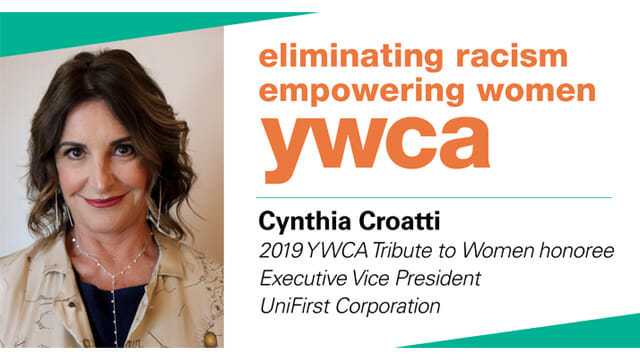 Cynthia Croatti, executive vice president of UniFirst Corp., Wilmington, MA, recently was selected by the YWCA Northeastern Massachusetts as an honoree for its annual Tribute to Women awards luncheon, which took place on May 16 at the Andover Country Club. Tribute to Women honors the work and community service contributions and achievements of a select group of outstanding women from the Merrimack Valley and North Shore regions, according to a news release.

“Cynthia embodies the YWCA’s mission of empowering women and working for social and economic change,” said YWCA Executive Director Susan Staples. “She has not only excelled in her career, but has also made an impact by serving as a role model and making significant contributions that benefit the communities in which we live and serve.”

Croatti joins a group of 21 other Northeastern Massachusetts honorees, representing more than 11 industries. “I am incredibly proud and honored that the YWCA selected me as one of their Tribute to Women honorees,” Croatti said. “The YWCA is a phenomenal organization and does so much to support women, children and families throughout the region. I learned from my father and our company founder, Aldo Croatti, the importance of giving back to one’s community, and I will continue to be a champion for women and others by supporting educational and career-development opportunities.”

Croatti first joined UniFirst in 1980 as assistant treasurer and developed the company’s first internal communication programs before also taking over responsibility for the purchasing department. She was promoted to treasurer in 1982, then took time off to raise her children, returning a few years later on a part-time basis. In 1995, Croatti was again working full-time at UniFirst and was named to the company’s board of directors – the first woman to hold a seat on the UniFirst board. Since her appointment to the board, UniFirst has been named a “Winning Company” by 2020 Women on Boards for having 20% or more board seats held by women.

Croatti was promoted to her current position, executive vice president, in 2001, and today she also oversees the company’s human-resources department and philanthropic initiatives. She has been instrumental in bringing in and leading corporate programs that provide UniFirst employee team partners with opportunities to further their education and careers. She has also made it her mission to identify and partner with charities that best reflect UniFirst’s founding core values, which include living and leading with a respect for others (the Golden Rule), the release said.